CDF Runners is an LGBT+ friendly club! That means we don’t tolerate any kind of homophobic, biphobic or transphobic abuse, and we do our best to be supportive and inclusive to everyone so that people feel welcome and can be themselves. David tells us about his experience of running and why it means so much to him.

This is a fuller version of a post I stuck up on Instagram last week, so if you found that boring then stop now. Hopefully if you didn’t then you might enjoy reading a bit more too ?

I went for a run on Sunday with some mates and took the opportunity to proudly wear my new #rainbow run club t-shirt which CDF Runners have produced to mark LGBT History Month.

As it happens, it was just one of those runs that felt really hard work but it did give me the opportunity to do a bit of thinking around the t-shirt I was wearing. The club held an “official” (in as far as anything we do is official!) launch event for the t-shirts at Grangemoor parkrun on Saturday 24th February where loads of us wore the new tops. It was great how many people supported it.

The rainbow t-shirts have been mega popular with club members – and of course no, not all or even most of the folk who’ve bought one identify as LGBT, but they are “allies”. More people have asked if they can get one and it’s great that it will soon be added as a standard kit item for people to buy. 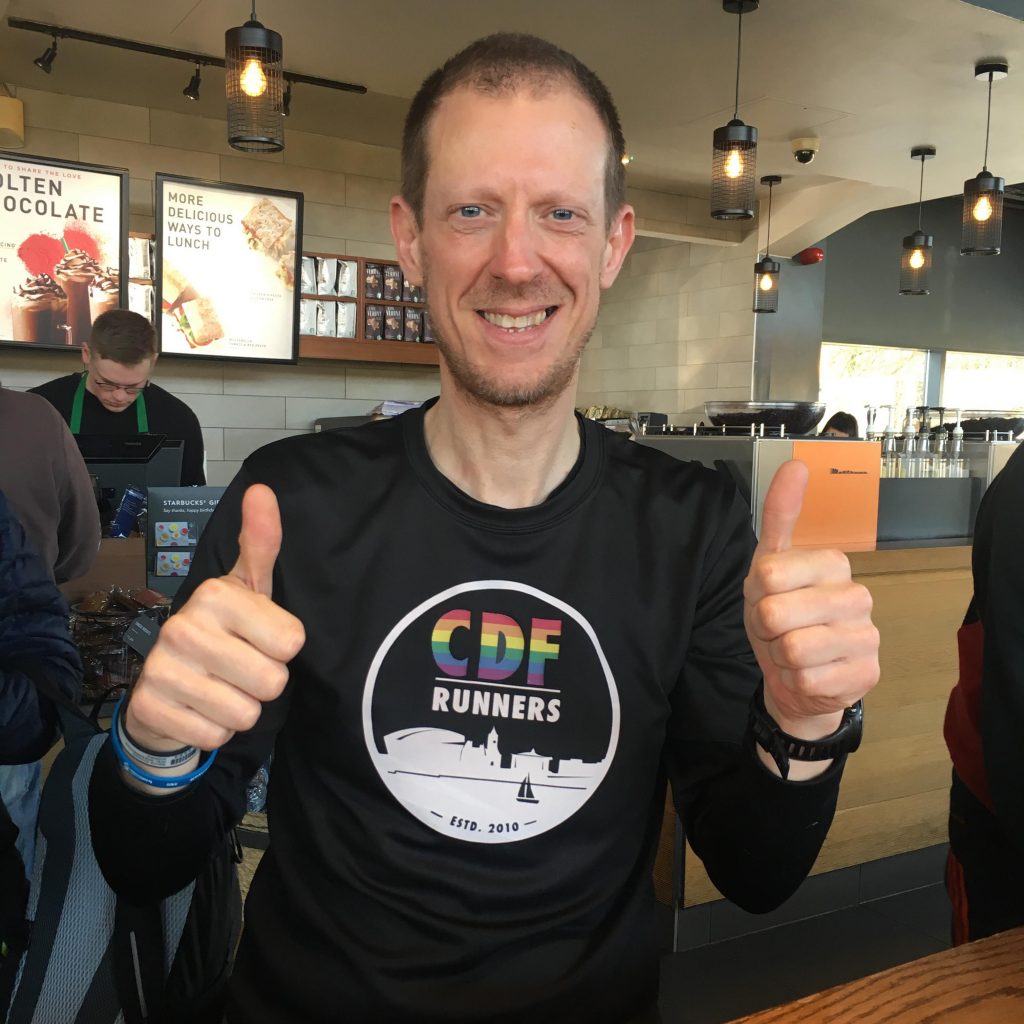 So, a bit about me – I came out, not through choice, when I was 14 and so my entire school knew about it. Faced with such a predicament I came out (lol) fighting – I was bold, loud, proud and sincerely unapologetic. Inexplicably, I suddenly became very popular. Not what I expected.

As such, luckily I faced hardly any overt homophobia, and being gay and out didn’t present me with many problems. But I know that’s not the same for everyone, whether locally, in other parts of the UK, or in international terms – many LGBT people are discriminated against and in the worst cases at risk of their life. Many people experience extreme anxiety or depression as well as discrimination.

I’ve mellowed with age but as you can imagine I’m not someone who thinks he needs permission or validation from anyone to be who I am. Peer approval is in many ways low on my agenda (though probably not as low as I’d sometimes like to think ?) 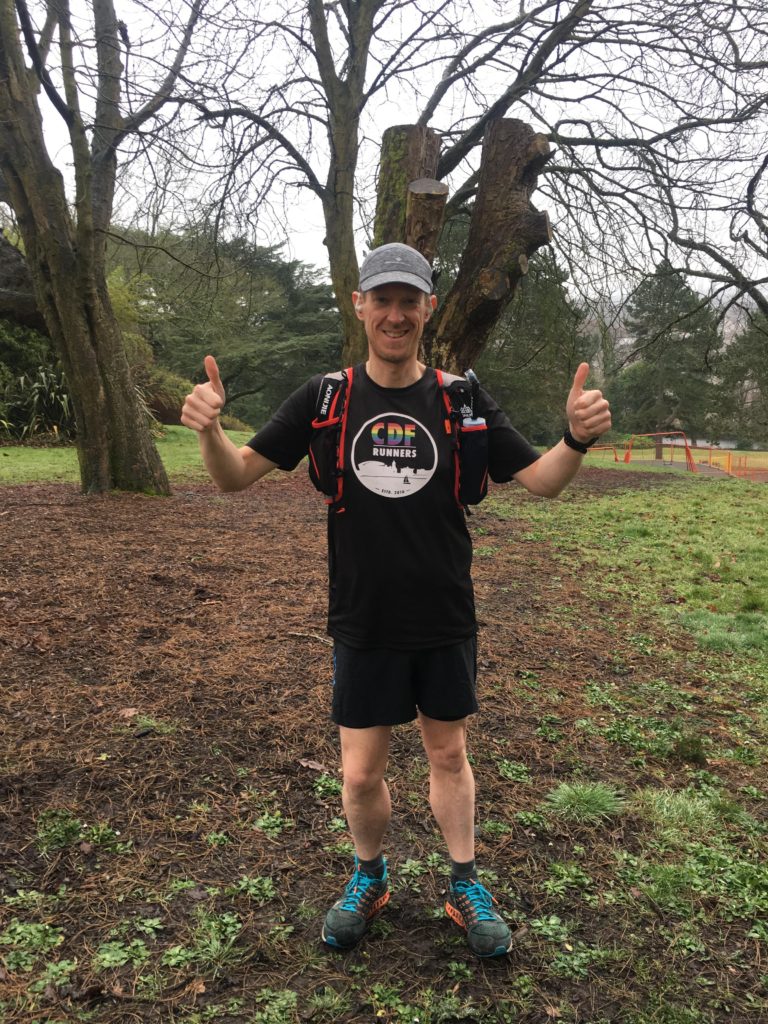 But the thing is that does not mean I don’t find myself feeling hugely grateful, humbled and thankful when I witness a sign of solidarity like club members buying these tops, because I actually am very thankful. Very. Shhhh, don’t tell them, but it’s true.

The running community is such an open and welcoming one.

Runners come from all different backgrounds and whether it’s at run club, parkrun, Couch to 5k, or wherever you run you’ll find yourself talking to a variety of people and I think this meeting of people who might not otherwise meet is part of the reason running helps to foster openness – where difference, whatever it is, is not only accepted but celebrated.

I’ve lost track of the amount of times I’ve run with someone I don’t know that well, chatted and found myself thinking “wow that’s so interesting I want to know more”. That’s when I’m not being pathetically unsocial and listening to music on my earphones… 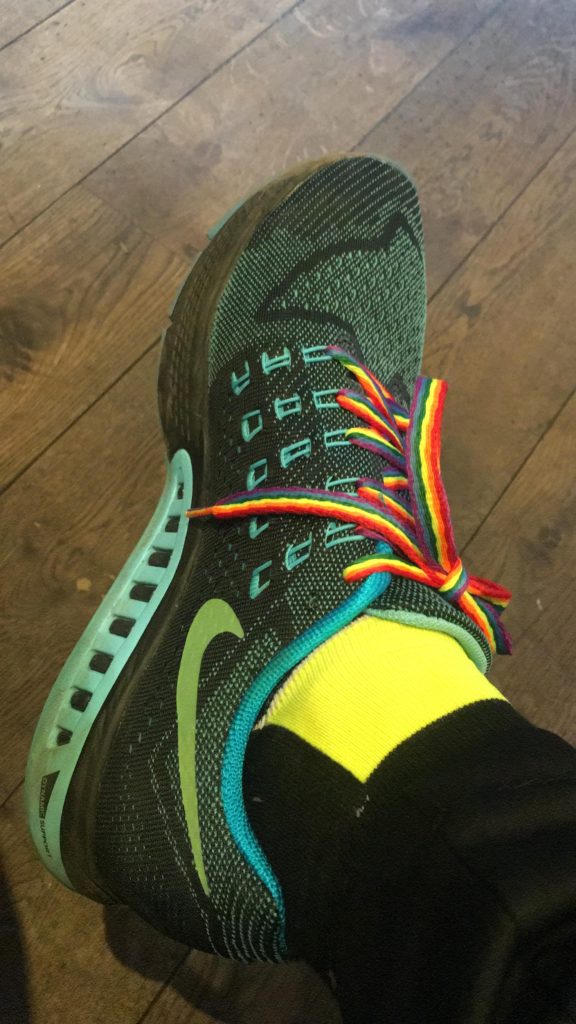 And though this month is rightly focused on LGBT issues, I’m really talking about broader issues of difference as well. All of us can on occasion find ourselves slipping into stereotyping of one sort or another, none of us are perfect by any means, but the most important thing I think is to be aware of that and wanting to better ourselves and get past it.

So this post is about many different things – LGBT yes, but also, and let’s spell some out here, sex equality, disability rights, class prejudices, racial prejudice, prejudice against travellers, and there are many others. All those things that some people refer to as “PC”. I’ve always viewed “PC” as meaning giving a damn about other people’s feelings. In other words, it’s a good thing.

So that’s why running can be so positive – you will meet all sorts, and of course all sorts will meet YOU. And it’s nice that you won’t be judged.

I’m quite an open person and have a fair bit of confidence but I can feel uncertain in new company and reluctant to be open about being gay – but I’ve never felt like that with any run club I’m involved with – CDF Runners, White Rock Runners, or Moti.

That’s testament to how welcoming & diverse these groups are. I will always appreciate that.

I’m also lucky enough to work for an employer that embraces diversity. 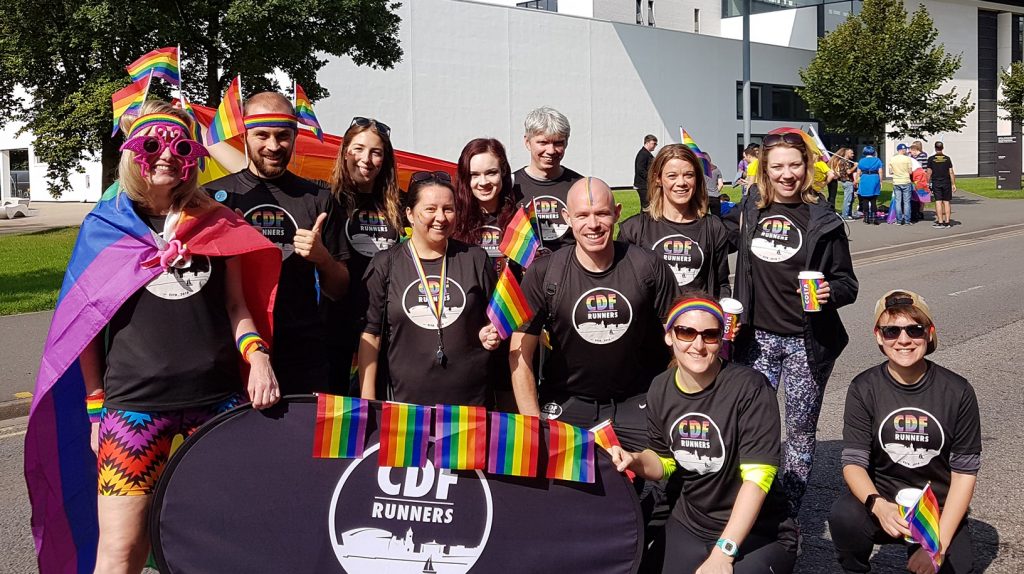 It’s very easy to forget that we spend most of our time in our own social bubble – we’re singing to the choir and to an extent so is this post but you would not have to go far to experience horrible insidious prejudice, so all we can do really is take those opportunities we can to challenge prejudice.

Oh – and we have a bloody good laugh as well.